A Long Way from You
By Gwendolyn Heasley 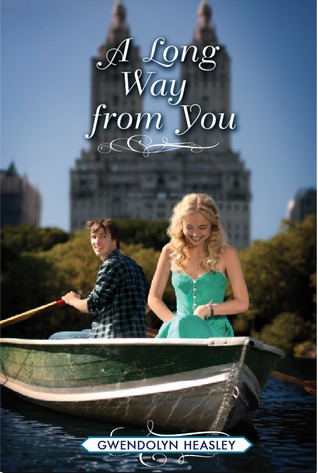 Story Synopsis:
Kitsy Kidd is on her way to New York City to spend part of her summer at Parson’s for an art class. It will be the first time she has flown, left Texas and had an actual art class taught by someone other than the former French teacher. While in New York, Kitsy’s eyes are open to a whole new world including late night diners, clubs and elite parties. She also meets wonderful new people at her class and not to mention that mysterious art loving musician, Tad. Will Kitsy enter into a New York state of mind and forget about her hometown of Broken Spoke or can she hang onto herself in the confusing and but often times magical New York City?

My Thoughts:
We first met Kitsy in Heasley’s Where I Belong. She was one of the first Broke Spoke students to befriend Corrine Corcoran, despite their almost opposite dispositions and family life. She was lovable in the first book and I am happy to say that that has continued in this companion book. Kitsy has not had an easy life—her mom is an alcoholic and absentee parent to both Kitsy and her brother. Despite being many, many miles away from home and confronted with so many possibilities to forget her roots, Kitsy cannot help but think about: home, Hands (her boyfriend) and their future and what she wants with her life. When challenged to a final art portfolio, Kitsy is surprised to find out that her hometown is the inspiration she seeks because that is where her heart lies. What Kitsy learns though in the end, its okay to leave home but it always sticks with you.
Posted by Stephanie @ Love. Life. Read at 11:08 AM
Email ThisBlogThis!Share to TwitterShare to FacebookShare to Pinterest
Labels: 4_stars, Coming-of-age, realistic fiction, review, single-parents, young_adult, youth