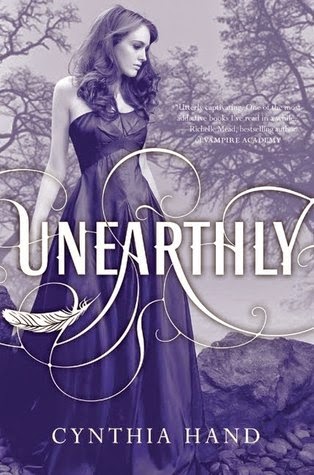 Reviewed from: a borrowed copy from the library

Purpose. This single word defines the first book for the Unearthly series. Clara found out at age fourteen she is an angel-blood. Her visions begin with a boy standing in the forest—that is it. From that single vision, they build until Clara and her mother put together they are needed in Jackson Hole, Wyoming. Clara, her mother and brother Jeffrey drop their lives in southern California and move to Wyoming.

Coming into the school year half way, Jeffrey and Clara are told to blend in despite their angel-blood making them stand out. At school that first day, Clara sees the boy from her vision—Christian. From that moment on, Clara seeks to put together the pieces of her vision, get to know Christian and just fit in with her peers. Though it is Tucker she is drawn too and cannot help but start to fall for, despite what she believes her visions are leading her—to be with Christian.

When the time for the vision approaches, tension rises. Clara, her mother and brother are not safe. The dark side is coming for them and it won’t rest until it claims them for its own side.

This was my first hardcore angel story. I read Ms. Higgin’s Sweet Evil and Sweet Peril and enjoyed them immensely. I liked how the story built gradually, though there were a couple times when I wanted to give in to the temptation to see how things were going to end.

What made me like this book as much as I have are the characters. Clara was an interesting character to me. I was not certain at first if Clara would have the strength that I wanted her to have—but I believe at the end of book one, she is definitely showing her strength of character when she saves her mother. Angela is probably the character I am most uncertain about—to me, it feels like she is hiding something. We know that Jeffrey is as well based on the ending too. Christian, I like him but not as much as Tucker! He would be my pick.

The other thing I appreciated about this book is the setting: Jackson Hole, Wyoming. I had mentioned this during the Radical Read-Along that it is a place I have wanted to visit for quite some time. Ms. Hand’s writing solidified it—it has been added to my definite list of places to visit. Who knows, perhaps I will come across an angel-blood, hopefully those on the side of good.

Looking forward to continuing on with the series to see what comes of Clara, Tucker, Christian, her mother and Jeffrey. So many questions I have that I hope are answered as the series progresses.