Let's Talk About It...A Topic Near and Dear to My Heart...

This is the start of Banned Books Week in libraries across the country. It is a time to raise awareness of the topic, to educate ourselves and other about the phenomenon and to celebrate books.

Everyone take a moment to look and/or think about the books around your house. How many of those books do think have been censored? Chances are, more than you think.

If you are like me and have anything written by John Green, Sarah Dessen, Laurie Halse Anderson, Harry Potter and the Sorcerer's Stone, Twilight, Hunger Games, a version of The Bible, or classics such as To Kill a  Mockingbird, The Catcher in the Rye, Tom Sawyer, or Wizard of Oz...or maybe picture books such as Where the Wild Things Are, And Tango Makes Three or Where's Waldo, then you are in possession of a book that has been banned/censored somewhere in this country or world.

With terms like censor, challenge, banned being tossed around, let's take a moment to define what those mean.


an official who examines books, plays, news reports, motion pictures, radio and television programs, letters, cablegrams, etc., for the purpose of suppressing parts deemed objectionable on moral, political, military, or other grounds.any person who supervises the manners or morality of others.an adverse critic; faultfinder.(in the ancient Roman republic) either of two officials who kept the register or census of the citizens, awarded public contracts, and supervised manners and morals.(in early Freudian dream theory) the force that represses ideas, impulses, and feelings, and prevents them from entering consciousness in their original, undisguised forms.-verb (used with object)to examine and act upon as a censor.to delete (a word or passage of text) in one's capacity as a censor.(Dictionary.com Unabridged)


A change in the access status of material based on the content of the work and made by a governing authority or its representatives. Such changes include exclusion, restriction, removal, or age/grade level changes. (American Library Association)


is an attempt to remove or restrict materials, based upon the objections of a person or group.(American Library Association)


is the removal of those materials. (American Library Association)

is the right of every individual to both seek and receive information from all points of view without restriction. It provides for free access to all expressions of ideas through which any and all sides of a question, cause or movement may be explored. Intellectual freedom encompasses the freedom to hold, receive and disseminate ideas. (American Library Association)

For me as a reader, parent and librarian it is disheartening, frustrating and offensive. I could not imagine telling someone NOT to read something let alone telling an ENTIRE student body or community they should not read something. When I say this, I do not mean that it is not okay to have an opinion, just that why is one person's opinion more relevant or important that their opinion should override everyone else's so much so that it causes that the book in question to be removed from their library's shelf.

Every day at work I am asked for book recommendations. I do not let my personal opinion get in the way of handing a book to someone--if I feel like it might fit what they are looking for in a book. For instance, I am not a huge high fantasy reader. I may not PERSONALLY chose to want to read such a book again, but that does not mean I cannot recommend it to a reader who has clearly indicated they like high fantasy.

Most days at work I am also confronted with parents asking about the content of the young adult books--as I am the young adult librarian. I am honest but at the same time I rather work with the teen who is asking for helping finding a book so I can figure out what THEY like to read or are looking for in their books. If I know that the TEEN does not want to have a book with violence, or sex, or fill in the blank category, than I will avoid giving such a book to them because that is THEIR preference. I will tell parents who are concerned about content what is in a book, but I do not make the decision for them on whether that book goes home with them or not. Do I feel like there are times when I want to bang my head against the wall because I cannot get a parent to get over their fear that if a teen reads about sex, it means that they want to have it or God forbid, they already are--ABSOLUTELY but it is my job to help fulfill the needs of my library users. That is the reality of my job as a librarian. It gets away from an INDIVIDUAL opinion when that parent takes it to the next level saying NO ONE should read this book because of x reason.

As a book reviewer, it is my job to offer critical viewpoint of a book. I have opinions on what I like to read--as we all do. I review books for myself as my reading record here at Love.Life.Read. I also review books professionally for Booklist and Library Journal. Those reviews I have to take into account myself as a reader but also how x book fits into the realm of what has already been published and readers in general. If there is a book that is a better done one, then I will say it as others depend on having this feedback when they are looking at spending precious dollars to purchase materials.  I strive to meet a balance here at Love.Life.Read, offering my personal opinion and how I feel they fit within their niche but these are my PERSONAL opinions, not my employers or journals' opinion.

What I cannot speak about is how censorship feels to an author. So you might wonder, how does an author feel about having one of their beloved books censored? Take a watch at this amazing video:


Reasons Why Books Are Challenged

You might ask yourself why books are banned. I created these pie charts broken up by type of materials and reasons cited as to why they should be banned during a graduate school project.  Each of these have taken a look at the top ten books banned according to the American Library Association from 2001-2008. While I have not updated these charts to add in the last few years, I still think it will help give you an idea as to the reasons cited against books. 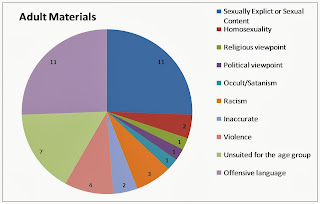 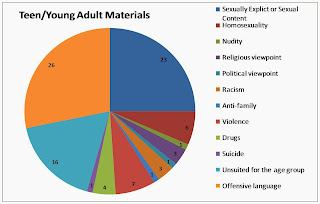 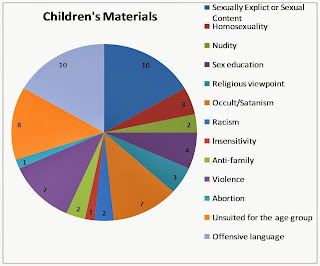 The driving point about censorship is that OTHERS feel they should decide what EVERYONE should be reading...whether that title should be offered to all 800 children at an elementary school or the 20,000 people served by that public library branch. "Challenges do not simply involve a person expressing a point of view; rather, they are an attempt to remove material from the curriculum or library, thereby restricting the access of others" (American Library Association).

I hope that while we raise awareness this week that this awareness does not taper off--it is a topic that deserves to be recognized and discussed anytime, any day of the whole year.


Remember: defending someone’s right to speak doesn’t mean you agree with what they say. Defending the right to read a particular book, or view a work of art or a film, doesn’t mean you like it or agree with its message. Recognizing that others have different views about art, politics, literature and religion, and that their views are entitled to the same respect and protection as your own, is a form of tolerance required of all in a pluralistic society. (National Coalition Against Censorship)