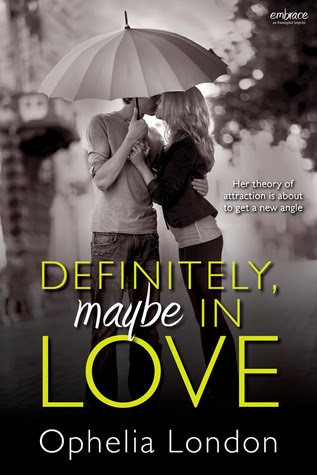 Definitely, Maybe in Love
By Ophelia London
ISBN: 9781622661831
Publication Date: October 28, 2013
Reviewed from: a copy provided by Entangled & Macmillian--thank you! I have since purchased a copy. :)
Blogger note: this book is on sale for $0.99--a steal!! Be sure to check out Amazon, Barnes & Noble or other eBook vendors.

Story Breakdown:
Spring Honeycutt is determine to live the life of a sustainable consumer. She has enrolled at Stanford as an environmental science major (holding down three jobs and taken out student loans to do so). She lives the lifestyle as much as possible--wears her hair in braids, shops at second hand stores, is a vegetarian and more. To her, land developers are harden criminals against the environment--the last thing she wants to do is EVEN consider that the land developers side of the story.  Per her professor's advice, she must stop to think about the opposition to add the depth to her thesis if she wants to have any hopes of it being published. Enter Henry Knightly III, a land baron's son. Of course Spring and Henry are destined to hate each other--right?
Much to her surprise, Henry and her form an unlikely friendship. They like to debate and can argue each other into a corner, but cannot deny the attraction they feel for each other. Henry forces Spring to look at things from the other side of the equation, just as Spring forces him to examine how things have been done in the past. Through a series of mistakes and assumptions, the two are driven apart and together throughout Spring's junior year at Stanford. When they finally seem to be able to be together, the unthinkable happens. Will the two of them ever end up being able to be together when the time is right?

My Thoughts:
This is a modern retelling of Jane Austen's Pride and Prejudice but even if you are not a fan of hers, you will fall in love with this story. Set in present day, the characters are your typical collegiate students trying to figure out their way in life and their own opinions.
The characters are fabulous. Spring is a complex, opinionated sometimes irritating but lovable character. She is at the point in her life where she feels that she has to live the lifestyle to really believe what she is advocating. Henry is brooding, equally complex and opinionated but likable guy. Even when you feel like you should not like him, he just could make me smile at the things he said and does.
Those who are familiar with Pride and Prejudice will see the similarities of the story but not so much so that you are bored with it. Spring and Henry still have to get through their own issues and challenges before they can fully appreciate each other.

My Last Impression:
Grinning ear to ear while reading it, this story is perfect on those days when you need a little brightness in it.