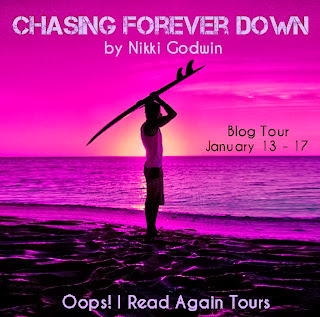 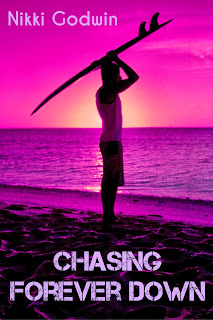 Reviewed from: ARC provided by Nikki and Oops I Read Again Tours--Thank You!!

After seventeen-year-old Haley Sullivan meets a mysterious stranger who plays by his own rules, she's more than determined to learn every trick of the trade from the master himself. But her dream-chasing mentor disappears after that night, and according to the local newspapers, he's been dead for years. Knowing he's very much alive, Haley enlists best friend Linzi to join her on a scavenger-hunt-style road trip that ultimately lands them in the surf town of Crescent Cove, California. Mystery guy is no mystery here, though – he's Colby Taylor, the west coast's biggest professional surfer.

If Haley wants to talk to the wave rider again, she'll have to get past his four intimidating bodyguards who are highly skilled in the business of sending starstruck fangirls back to where they belong. Haley is up for the challenge if it means chasing her dreams and escaping the perfectly corporate future that's been planned for her. But dealing with these bodyguards isn't exactly what Haley imagined it'd be. Sure, being thrown off a jet ski sucks, but falling in love with one of them might just be worse.

Imagine meeting a stranger who helps you realize that you are following the predetermined footsteps of someone else's plans. That's essentially what has happened to Haley when she meets Colby Taylor at her parent's business parent and when he fails to show up the next day, she will search for him across the country.

The cast of characters in this novel are laugh-out-loud, crazy and all around great people. To drive across country with your best friend will either make or break the friendship. The group of guys is equally as amusing as they are a family for each other.

This story is about being true to yourself, searching for your dreams and once figuring them out--having the courage to stand up for them. I do not know much about surfing as I am from the Midwest but I was neither confused nor lost interest in this aspect of the story. I was empathetic to Haley, feeling as though she had no choice but to follow what her parents wanted her to do. With this being the first book in the series, I am intrigued enough to want to continue on with the series--a good sign in my eyes!

Not just a surfing story--you will be dreaming of having your own endless summer.

Nikki Godwin is a Young Adult/New Adult author from the southern USA. She is a city girl who can't live without Mountain Dew, black eyeliner, Hawthorne Heights, and candles from Bath & Body Works. When not writing, she's not-so-secretly internet-stalking her favorite bands. She may or may not completely love One Direction.

Up for grabs is 2 copies of Chasing Forever Down!! Enter below in the Rafflecopter for your chance to enter--Good Luck!!