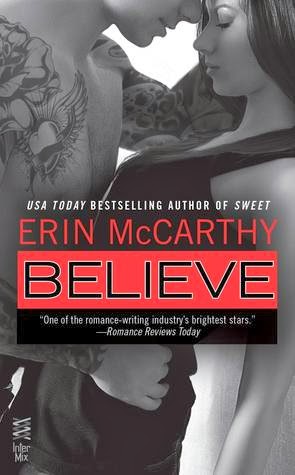 Believe
by Erin McCarthy
ISBN: 9780698148710
Publication Date: January 21, 2014
Reviewed from: an ARC provided by publisher--Thank you Penguin!!
Purchase Notes: I have since purchased a copy for myself


Robin used to be a party girl… until she got black out drunk and woke up in bed with her best friend's boyfriend. Now she's faced with being THAT girl, and couldn't be more disgusted with herself. She can't even tell her friends the reason for her sudden sobriety and she avoids everyone until she meets Phoenix—quiet, tattooed, and different in every way that's good and oh, so bad…
Phoenix is two days out of jail when he meets Robin at his cousin's house, and he knows that he has no business talking to her, but he's drawn to her quiet demeanor, sweet smile, and artistic talent. She doesn't care that he's done time, or that he only has five bucks to his name, and she supports his goal to be a tattoo artist.
But Phoenix knows Robin has a secret, and that it's a naïve dream to believe that his record won't catch up with them at some point. Though neither is prepared for the explosive result when the past collides with the present…

Ms. McCarthy's new adult series continues with the third book in the series. We saw hints that something happened to Robin in the the second book but we did not know what. We do learn what has happened at the start of this book and from that point on, she vows not to drink and to turn her life around. She sets out to rediscover herself.

Phoenix made mistakes as well--the kind that lands you in jail. However, these mistakes may not be what they seem on the surface. He is just trying to move on with his life one step at at time, so the last thing he wants is to really get involved in is a relationship. But, why does he click as well as he does with Robin?

I really like Robin and love the searching and growth she goes through in this novel. The one thing I wish, of course, is that she would own up to her mistake sooner but that is what adds to the drama and tension to the novel. Plus, given that Robin is a new adult, part of life is growing and living through life's experiences so I believe that her reaction to the situation is how most would handle it.  Ms. McCarthy shows that life has a way of handing us situations that challenge and test the bonds of friendship--some may stand and survive and others may not. We do not how all will work out yet--only the fourth book will answer all of these questions.

I am really enjoying this series and I am looking forward to the fourth and final book--Shatter, coming out in September. :)

I read this during January 2014