Celebrating Under the Spotlight by Angie Stanton! Giveaway and Excerpt!! 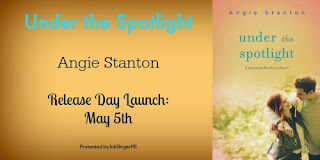 About Under the Spotlight: 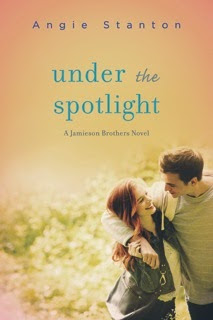 After an embarrassing stint on a reality-TV music competition years ago, Riley vowed never to sing again. Now she's behind the scenes, working at the prestigious Sound Sync recording studio, and life is looking up. But then Garrett Jamieson, the oldest brother in the famous Jamieson brothers band, crashes into her world.

Garrett has hit rock bottom, and he is desperate to reinvent himself. After calling in a few favors, he ends up working at Sound Sync to learn the ropes of record producing from the industry's best. And he can't believe his luck when he discovers that Riley has been keeping a secret—she is an amazing singer. By producing her album, he's sure to top the record charts again. But Garrett is forced to use every trick in his arsenal to persuade the sassy girl to record.

Riley refuses to sing—or even entertain the thought of it—and sparks fly as Garrett finally meets his match. But in the heat of the moment, one stolen kiss changes everything. Will Riley be the first person to finally rein Garrett in, or will Garrett succeed in getting Riley back under the spotlight?

Excerpt from Under the Spotlight:

Garrett’s head pounded, and not from the hangover that would greet him with the sunrise, but from being slammed against the wall. Or maybe it was from the few punches that came later when he crashed to the floor of Ye Ole Boston Brew Pub and knocked his head on the beer-stained tile.

He rubbed his unshaven face, and dried blood flaked into his hand. Great. He needed a shower and an aspirin, but the Boston city jail offered neither. Where the hell was Peter? It had been over an hour.

The sharp edge of the narrow bench he lay on cut into his back, making his already battered body even more sore. He only hoped the other guy felt worse. The jerk had the audacity to call him washed up. For Christ’s sake, he was only twenty-two. He’d accomplished more in the last five years than that asshole would in a lifetime.

Reaching for his phone, he remembered the cops had taken it, along with his wallet and keys. Damn it.

“About damn time,” Garrett huffed, rising slowly. He tugged his shirt into place, smoothed back his hair, and followed the officer down a long corridor past several cells with other perps. He couldn’t wait to get away from this hellhole. The officer opened a solid metal security door, and Garrett walked through, relieved to be free.

In the far corner of the waiting room, studying the Most Wanted posters, his brother waited, wearing faded jeans and a gray T-shirt.

Peter turned with a smirk on his face and his hair still ruffled from bed. “Just checking to make sure your ugly mug isn’t up here.”

Garrett sneered. “It wasn’t my fault.”

“Never is.” Peter sighed. “You realize this is becoming an annoying habit. You’re lucky your Jag is still in the shop from your crash last week, otherwise you might have added drunk driving to your record.”

“You have more to worry about than me. Dad isn’t going to be happy about this.”

“No reason Dad needs to hear about it.”

“You’re kidding yourself if you think you can keep this under wraps. A couple of photographers are outside. You’re busted. Again.”

Garrett stepped to the counter and signed his discharge papers.

“At least I know how to live a little. You’re tied down to a ball and chain.”

His brother grinned with a smile that melted millions of young girls’ hearts. “Well, I happen to have the hottest ball and chain on the planet.”

Garrett rolled his eyes as he collected his personal effects. Peter was so in love it made Garrett ill. It’s not like he wasn’t glad for his brother, but Peter and Libby were so damned happy all the time, he wanted to puke.

“Yeah, and you’re missing out on the best years of your life,” Garrett snapped.

“How’s that? I’ve been watching you drink yourself into oblivion, rack up speeding tickets, and pick a fight every chance you get. You don’t look too happy to me.”

“You ever think that maybe you’re to blame?”

“How do you figure that?” Peter asked, opening the door to exit the police station and ducking his head as cameras flashed.

“Seriously?” Garrett stopped suddenly. “You’re the one who broke up the band.”

Angie Stanton never planned on writing books—she wanted to be a Rockette. However, growing up in rural America with her brothers’ 4-H pigs as pets, she found that dance didn’t quite work out. Instead, she became an avid daydreamer. After years of perfecting stories in her head, she began to write them down, and the rest is history. When not writing, she loves watching natural disaster movies, going to Broadway musicals, and dipping French fries in chocolate shakes.


Come back on May 11 to see Ms. Stanton's Top Ten Reasons Why YOU Should Read Under the Spotlight.