Celebrating Searching for Beautiful by Jennifer Probst--Read an EXCERPT Today! 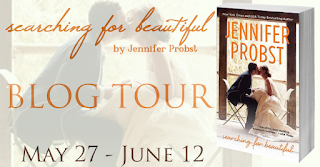 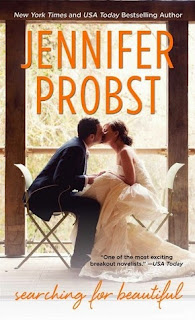 SEARCHING FOR BEAUTIFUL Synopsis:
The highly anticipated third novel in the Searching For series from Jennifer Probst, “one of the most exciting breakout novelists” (USA Today), featuring a   runaway bride and the man who wants to be more than just her best friend...

Genevieve MacKenzie has her life completely under control. About to wed the charming Chief doctor at the local hospital, she’s an up-and-coming surgeon with everything she could ever want. Until an escape through the church window on the day of her wedding   sends her life into a tailspin...and flings her right into her best friend’s arms. When Wolfe catches his best friend falling out a window on her wedding day, he doesn’t ask questions. He whisks her away, determined to watch over her and discover the truth behind her desperate escape. But when his feelings turn more than platonic, he realizes he may risk his most important relationship in order to protect his damaged heart, and the woman he loves. Can Genevieve and Wolfe’s friendship turn into something deeper—or is it already too late for true love?

Want a SNEAK PEAK? Read Below for an EXCERPT:

He made a move to get up, but she lost it, knowing

once she spotted the pity in his eyes she may

never be the same. “Don’t you dare feel sorry for me!

I need you to leave. I’m begging you to go out the

door and give me time. Tomorrow, I’ll put myself back

together and everything will be fine.” Her voice broke

but she pushed on. “I just need some time alone. To

She had nothing left, so she turned and walked toward

the window. He didn’t move from the edge of

the bed. Didn’t breathe. She pressed her forehead to

the cool pane of glass and prayed to finish this awful

night in isolation. Tomorrow she’d get her shit together

and it would be okay. But tonight all bets were

off, and she felt dangerously out of control . . . on the

pinnacle of something so fierce she didn’t know how

The mattress creaked. Shoes hit the floor. She

held her breath and waited for the blessed silence,

but instead of heading out, he stopped right behind

her. His body heat roped her in and pulled tight, like

a helpless calf at the rodeo. She held the windowsill

in a deathlike grip, sensing him closing the distance

inch by precious inch, until his chest pressed against

The rough growl was full of danger, command,

heat. She was helpless to disobey, leaving the safety

of the window to turn and face him full force. He

reached out and tipped her chin up.

Blistering, raw lust shot from his eyes. As if they

were glowing from under the sea in the Caribbean,

she tumbled into the depths of a gaze that promised

everything with a Warning: Danger label attached.

His grip tightened, refusing to allow her to retreat,

and he crowded her space by taking another step between

her thighs. The sill dug into her lower back. His

scent drowned out everything but the need to touch

him, feast, taste—the delicious mix of lemon and soap

and cotton surrounding her.

“I need you to listen closely, because I’m only

going to say it once. Understood?”

deadly man with an agenda. Transfixed, she nodded,

unable to form words, mere prey beneath the command

of a dangerous predator.

“I’m done with excuses and conversation and politeness.

I’m over this bullshit of you questioning the

even breathe without wanting you with my last

breath. I’m tired of walking around with a dick that

won’t go down when I catch your scent, or look at

your sweet curves, or imagine being buried deep

within you. Are you still listening, Gen?”

Her body flamed so hot and bright she was surprised

burn marks didn’t appear on her skin. She

began to shake, and her belly uncurled so a river flow

of liquid warmth coursed between her thighs, tightening

her muscles, gripping her with a need she’d

never experienced or believed could be real. “Yes,”

“Good. Because tonight I’m going to fuck you. All

night. If I was a true friend, I’d walk out that door and

give you the space to rebuild your walls. You deserve

that. But I’m a selfish prick who needs you in my bed

“I’ll give you three seconds to run. It’s the smart

thing to do. Just walk away from me and we’ll never

mention this again. We’ll go back to being friends,

push this whole episode aside, and go on pretending.

But if you’re still standing here after that, you’re mine.

Every part of you. And I promise you’ll never question

your ability to cast a sexual spell on a man so

deep and encompassing he’ll spend the rest of his life

comparing you to every other woman he touches.”

Her head spun, the room tilted, and she grasped

his arm to keep her balance. “Wolfe.”

Her stomach dropped to her toes. His mouth

She swallowed, one foot poised for flight, knowing

it would wreck everything, change their relationship

forever, open a door that could never be shut and

“Three. Too late. You belong to me for tonight.”

“Don’t think. Just give me everything you got.”

He cupped her cheeks, dropped his head, and took

Jennifer Probst wrote her first book at twelve years old. She bound it in a folder, read it to her classmates, and hasn’t stopped writing since. She took a short hiatus to get married, get pregnant, buy a house, get pregnant again, pursue a master’s in English Literature, and rescue two shelter dogs. Now she is writing again.

Is It Your Lucky Day?

An amazing giveaway package is up for grabs--a Searching for Beautiful necklace and a SIGNED backlist title (winner's choice) of one of Ms. Probst's titles!