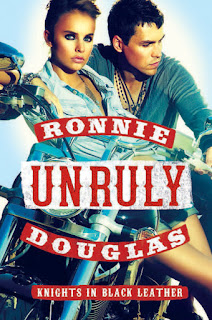 Reviewed from: an eARC provided by the publisher--Thank You Avon!
Purchase Notes: I have since purchased a copy for myself

The second novel in Ronnie Douglas’ sexy Southern Wolves motorcycle club series—reminiscent of Kristen Ashley and Jay Crownover—tells the story of an aspiring fashion designer and a biker who discover a desire that knows no limits.

When the daughter of one of the Southern Wolves gets a flat in the middle of a thunderstorm, there’s only one thing to do—strip down to her underwear and get a little muddy. But when Alamo, the sexy biker shows up to rescue Ellen yet again, things are bound to get a whole lot dirtier.

Between the trouble he left behind and club rules, Alamo knows he needs to stay clear of Ellen. He’s not looking for a woman or complications—even when that woman is everything a man could want. Unfortunately, Ellen isn’t playing by anyone’s rules but her own these days, and a Southern woman who’s been raised by Wolves is awfully hard to deny.

So when they give in to their raging attraction, both get much more than they bargained for.

What Did I Think of Unruly?

This has been one of my most anticipated reads since I finished the first book (Undaunted) last fall. I am always nervous reading books  I have been looking forward to, so much so I admittedly will avoid some in fear of being disappointed. I am relieved to say I enjoyed this book very much.

I was surprised that the first chunk of this book covered a similar time frame as Undaunted. For those of us who read the first book, we meet Ellie (Ellen) as well as the mysterious Alamo blip. The chemistry is evident from that first book and it is only build upon in the second book.  The back story of both characters is shared and we can really delve into their personalities and their foundations. I do feel like we get to know Ellie a bit more than Alamo, but I do not feel the story suffered for it.

While I never doubted the two would end up together, there are the twists and turns that keep Unruly from being mundane. For those who enjoy a MC story, this one goes a bit into the workings of a MC. This is mainly the story about Ellie and Alamo standing up for what they believe and what they want from their lives.

Ronnie Douglas is the writing name for a multiple NYT bestselling author. Drawing on a lifetime love of romance novels and a few years running a biker bar, she decided to write what she knew--dangerous men with Harleys and tattoos. Her debut “Ronnie book” was indie-published as part of a series she created and wrote with friends in 2014. You can find Ronnie at: http://www.ronniedouglas.com

You are in luck! The tour has 3 paperbacks of Undaunted up for grabs!!