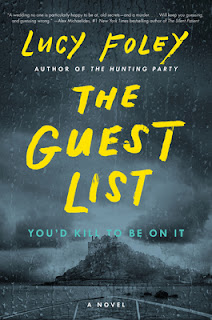 The Guest List
By Lucy Foley
My Rating: 4 out of 5 stars
There is something about weddings that brings out the best and worst behavior in people, doubly so when it is on a secluded island, or so the premise of this story goes. Due to the wedding of an rising power couple, many people throughout their walks of life have been pulled together to attend their wedding. We know a murder has happened, we are told from the beginning and on the jacket flap. The story flashes back between now and time leading up to the wedding reception evening, also told through multiple points of view.
The atmosphere of this island is fantastic--despite its sinister past and the ominous pretense, I wish I could visit it when we finally visit Ireland. To me, the characters are not meant to be likeable and the author does a good job at this. I could not find myself relating to any of them. If I had to pick one character, I would lean toward Hannah as she is the one I liked the most and could relate the most to throughout the story.
I listened to this book and with the decision to use multiple narrators, it was easy to tell when the story jumped points-of-views or timelines, which I appreciated. Because it is set in Ireland and with cast of characters from throughout the United Kingdom, it was also nice to hear the narrators bring the character's dialects to fruition instead of having to imagine what they sounded like. If you enjoy audiobooks, I do recommend this one. As far as the story itself goes, I found this one well paced. I did not find my mind wondering or wishing that there was not as much build up to the big reveal. I liked the twists and while some were expected--though I think that was planned on the author's part--a few I did not pick up on while listening to it.
I do recommend this book overall--whether reading it or experiencing it through the audiobook format as I did. Ironically, I am reading And Then There Were None by Agatha Christie at the moment too so if you are a fan of it, I think you would like this one too though I have not finished it yet. Reading it is giving me similar vibes with its isolated setting and unlikeable characters.
What about you--have you read this one? What did you think of it? Are you inclined to want to read more thriller spooky reads this time of year?