Heir to a Desert Legacy
By Maisey Yates 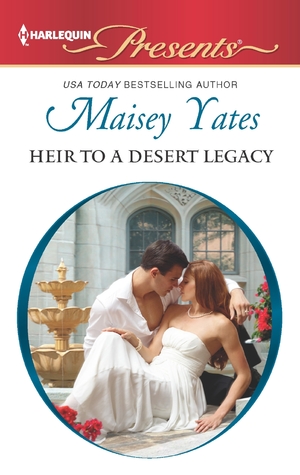 Overall rating: 2 stars
Reading Time: because I could not get hooked into the story, it took me over a day to read it.

Sayid al Kadar was trained from childhood to be a warrior. He's fought, he's conquered-but was never meant to rule... Thrust reluctantly to the throne, Sheikh Sayid is shocked to discover a child who is his country's true heir, and he'll do anything to protect him, even if it means taking on the child's aunt!

Chloe James might behave like a tigress protecting her cub, but this trained soldier can see her weak spot. Taking Chloe as his bride would appease the people of his kingdom, and provide the perfect outlet for the blistering chemistry between them....

It was a pleasant read. It built as the story progressed throughout Chloe and Sayid meeting for the first time in Portland, Oregon to traveling to his home in Attar and finally their marriage. Along the way, we learn both Chloe and Sayid are more similar than they realize, as they both experienced traumatic childhoods, will do anything to protect what they considered theirs and take on each other to ensure their nephew is safe and reaches the throne. To me, this was a pleasant interlude with moments of intense encounters, simmering passion and heartfelt emotions. It did leave me with a ho-hum feeling and it won’t be one I will revisit at a later date.